Blue Period (ブルーピリオド, Burū Piriodo?) is a manga written and illustrated by Tsubasa Yamaguchi. The series has been serialized in Monthly Afternoon, Kodansha's seinen manga magazine, since June 2017. The official English released was announced by Kodansha in November 2019[1] and the translated edition of Volume 1 was published in October 2020.

So far, the series has been collected into 11 tankobon volumes.

An single cour anime television series adaptation by Seven Arcs was announced on January 19, 2021, and premiered in October of the same year.

On 23 October 2021, A novel spinoff of Blue Period was announced. The first volume was released on October 28 of the same year.

A stage play adaptation was announced on Nov 19 2021 and stars Okamiya Raimu as Yatora Yaguchi. Showings started from March 25 to April 3rd in 2022.[3]

On 12 November 2019, CreepHyp - a well-known rock band in Japan, collaborated with Blue Period to make a 'MMV' (Manga Music Video) of "栞". [5] The 'MMV' has since been deleted but a copy of it has been uploaded back to Youtube and other proxy sites.

On 20 August 2020, a collaboration was announced for a commercial for Bourbon Alfort Mini Chocolate with a specially made song by YOASBI - "Gunjo", as the background music.[6]

The first commercial and "Gunjo" song officially released on 1 September 2020. This commercial stars Yosuke Sugino and an animated Yatora Yaguchi, in B&W. It features coloured paintings that span from the first arc to the Geidai Exam Arc.[7]

Promotional Ad for the First Commercial

A special music video for Gunjo was released a few days later, on September 4. It shows manga panels from Blue Period and people painting. The video has subsequently been privated on YouTube but previews can still be found on Twitter.[8]

The second commercial aired on 1 Dec 2020. Yatora Yaguchi and Yosuke Sugino reprised their roles, with the new inclusion of Ryuji Ayukawa, Sumida, Utashima and Koigakubo. All characters were animated in B&W.[9]

On Dec 7 2020, an advertising board ad of the characters in the second commercial was announced, alongside Yosuke Sugino as well. It was said that the ad was posted at train stations of JR East.[10] A follow up post by Ryuji Ayukawa shows the ad in Takadanobaba Station.[11]

A few months later, in 1 February 2021, a third commercial was released. Yatora Yaguchi and Yosuke Sugino reprised their roles again with the addition of new characters such as Yotasuke Takahashi, Maki Kuwana, Mayu Ooba, and Haruka Hashida. All characters were animated in B&W. It features coloured artworks each student made for the Geidai Exam.[12] A specially drawn illustration was made for this collaboration below.

Promotional Art for the Third Commercial

On 29 Nov 2021, ZONe Energy announced a promotional campaign with Blue Period. [13] This campaign features Blue Period characters and edited text to promote ZONe Energy on Twitter. On 10 Jan 2022, A longspread train advertisement poster was displayed. The poster includes a new illustration of the prep school students and a special feature; in which the letters in it are made up of peelable stickers, which can be taken for free. [14] 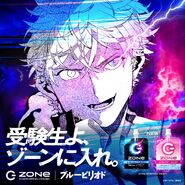 On 24 March 2022, the first exhibition of Blue Period was officially announced. The exhibition was held from 18 June to 27 September in 2022. More information can be found in their Offical Website. TBA

Community content is available under CC-BY-SA unless otherwise noted.
Advertisement